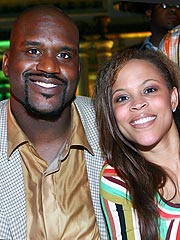 After nearly five years of marriage and four children together, Shaquille O'Neal filed for divorce from his wife Shaunie in Miami on Tuesday.

"The marriage between the parties is irretrievably broken," reads the petition, which was filed by O'Neal's lawyer, Ira Elegant, in Miami-Dade Circuit Court on Tuesday. It is not known who is representing Shaunie, according to The Miami Herald.

The petition reveals that the couple has a prenuptial agreement, according to the Herald, which also reports that should the court agree, a copy of the agreement "will be filed ... under seal."

The agreement "contains extensive provisions providing for confidentiality and non-disclosure."

O'Neal also says in the petition that Shaunie has been "secretive about her assets ... particularly with respect to certain properties owned or titled in either [her] name alone or in other entities" and requests that the court require Shaunie to give a "correct accounting of all money, funds, stocks, bonds, and other securities (including bearer securities)" acquired during the marriage.

Heat coach Pat Riley said Wednesday that he was "devastated" to learn the news about his star center. "I'm really saddened by the news," Riley said in a radio interview on 790 the Ticket. "But he will work it out â€“ they will work it out, as most people do."

The basketball star makes $20 million a year playing for the Heat, and nets even more through lucrative endorsement deals thought to be worth millions every year. The couple's home â€“ on Miami Beach's exclusive Star Island â€“ is up for sale for $32 million, according to the Associated Press.

Shaq married his then-longtime girlfriend Shaunie Nelson on Dec. 26, 2002, in a lavish, top-secret ceremony at the Beverly Hills Hotel.

The couple have four children together: Shareef, 7, Amirah, 5, Shaqir, 4, and Me'Arah, 1. Shaq, 35, also has a daughter, Taahirah, from an earlier relationship and Shaunie, 32, has a son, Myles.

Shaq recommends that his wife be "primary residential custodian" of their children and asks for "liberal rights of visitation," the Herald reports.

Ought oh....Â» RUMORS: MORE INFO ON SHAQ &amp; SHAUNIE + SUPERHEAD RUNS HER MOUTH // 'CONCRETELOOP.COM' YOU BETTER ACT LIKE YOU KNOW!

too bad they were cute toghter

and what about the kids

he was a cheater anyway...

Exactly!!! And rumor has it that she was sleeping with her personal trainer!!!

I agree, OT, did you read that book? It was wild!!! I read it again yesterday just to listen to the part about him and what he was doing with her.....I hope he is not surprised that she was cheating on his ass!!!!! And i hope the other dude looked better than his lurch looking behind!!!

This is so sad. I thought Shaq was one of the good guys who would never see a divorce. That is just a crying shame, and all of the children, they didn't stop to think about them?

I don't know exactly what went on to lead up to this point, but those kids are the ones that will suffer the consequences for it.

Thats why I thought it was so hypocritical of him to criticize Kobe during Kobe's scandal when he's just calling the kettle black.

Ah well... life goes on. He still sucks with the freethrows.