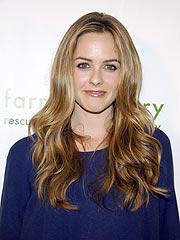 Alicia Silverstone is too hot for TV â€“ in Houston, that is.

The actress shed her clothes for a PETA ad championing vegetarianism set to debut in Texas Wednesday, but Comcast Cable pulled the 30-second spots from the airwaves.

In the commercial, Silverstone, 30, steps out of a swimming pool, unclothed and sharing the benefits of a vegetarian lifestyle.

PETA claims that Houston was chosen because it often ranks high on lists of cities with the worst eating habits. So why did Comcast pull the commercial?

A spokesperson for the cable company cited nudity in their decision to cancel the campaign, though the clips had already been paid for.

"[Viewers can] get an eyeful, not only of the stunning Ms. Silverstone, but also of our free Vegetarian Starter Kit â€“ chock full of delicious recipes â€“ that will make them drool for an entirely different reason," she said in a statement.

According to reports, the PETA ads will still run on television in Dallas.

I didn't think that the video was that revealing.

they are missing out!

It's just a butt.

yeah that was dumb

there are far much worse things that could have been shown, they are i think way over reacting.

I saw it a couple times on the PETA website to see what the fuss was about. My thought was, um, ok, whats the big deal? It wasnt full nudity, it was more of a hint. Of course my fiance kept playing it over and over again. Men, lol

The fact that little kids could see it on TV is enough reason to pull it. It's not "family" viewing.

IMO, society needs to draw the line somewhere. Morality is almost an afterthought these days as it is.

I didnt see them!

They are such prudes! I've seen worse!